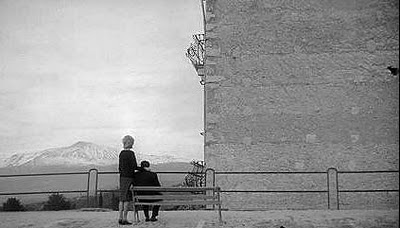 Still image from the final shot of L'Avventura (Michelangelo Antonioni, 1960)
Luxuriating in the view over the Sicilian coast, the Mt. Etna volcano, and the Mediterranean sea here at the Taormina Film Festival. Oh yeah, and seeing some good films too!
Peter Brunette,  June 15, 2010

Rather than viewing the narrative content of Antonioni's films as symbolic, as representations of an absent meaning, [Peter] Brunette calls for an appreciation of the visual in and for itself, as meaning 'is made affective, through line, shape, and form' (60). Meaning emerges from the image, it is 'made affective'. Searching for authorial intent behind seemingly obvious symbols -- Brunette shows through the discrepancy between Antonioni's own suggestions and the contrasting critical reception of his films -- will inevitably say more about the critical frame employed, than the film itself. What Brunette is claiming is the loss of referent for the sign, the loss of signification. This links nicely to his deconstructive concern, which is itself indicative of the flaws in the existentialist debate. The absences that characteristically mark Antonioni's films (witness the vanishing Anna (Massari) in L'avventura) points not to a transcendental absence, but rather indicates the way out of the Platonic illusion of the coexisting Ideal and (vs) real. 'David Martin-Jones, '[Review of Brunette's book on Antonioni', Film-Philosophy, Volume 3 Number 50, December 1999

Katherine's exclamation [in Viaggio in Italia, Roberto Rossellini, 1954] is also emblematic of the death theme that permeates the film, and that culminates in the sequence so aptly described by Brunette in the following passage: "The parts begin to form themselves into a man and a woman; death has caught them making love, or at least wrapped tightly in each other's arms. Suddenly, the museum, the catacombs, and the Cumaean Sybil all come together in one startling image: the physicality and rawness of the ancient world, the ubiquity of death in life, and love, however inadequate and flawed, as the only possible solution". Asbjørn Grønstad, "The Gaze of Tiresias: Joyce, Rossellini and the Iconology of "The Dead"", Nordic Journal of English Studies, Vol. 1, No. 2, 2002, citing Peter Brunette, Roberto Rossellini, (Berkeley: University of California Press, 1987, 1996)

In Peter Brunette and David Wills's much under-valued Screen/Play: Derrida and Film Theory [Princeton University Press, 1989] they discuss the form that a deconstructive mode of analysis might take. They write: 'From a deconstructive stand-point, analysis would no longer seek the supposed center of meaning but instead turn its attentions to the margins, where the supports of meaning are disclosed, to reading in and out of the text, examining the other texts onto which it opens itself out or from which it closes itself off'. [...] [I]t strikes me that a serious discussion of Brunette and Wills's book would be essential to any work purporting to discuss cinema and deconstructive politics.[...]  David Sorfa, Film-Philosophy, Vol. 2, No. 23, 1998

A number of the tributes to film critic and scholar Peter Brunette, who died last week at the Taormina Film Festival in Italy,  conveyed very movingly their opinion that he left this world while doing what he loved.

Those of us who followed Peter's activities and travels, at least from the vantage point of his social media network, certainly loved his updates on them, like his final Facebook posting above. His death was a huge shock, and a great loss, notably to the two spheres -- film scholarship and theory, and film criticism -- that he managed to join up, much more successfully than most, through his own prolific practice (he gave an account of some of the issues at stake in this choice in an interview here, and Gerald Peary's obituary beautifully refers to his unusual trajectory, for an academic, here).

FSFF's author's acquaintance with Peter Brunette began with his 'director books' (listed with his other work in his CV here), and in particular with his marvellous study of the films of Roberto Rossellini, now one of the best freely accessible e-books online, thanks to Peter and his publishers. Peter was a fan and an important supporter of freely accessible culture and ideas on the Web, as this article he wrote in 2000 testifies.

Fortunately, a very good selection of other articles and chapters (and a substantial podcast) by him may be experienced at the click of a mouse, quite aside from the virtual reams of online movie criticism under his byline. That means that the following list of links to the former work - to Peter Brunette's formal film studies - is, then, the most fitting tribute that FSFF can give to a scholar who gave so much and influenced so many in his too short (or just long enough) life.
Posted by Catherine Grant at 15:36