The SENSES of an ENDING from Catherine Grant 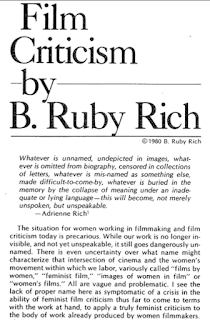 The video is dedicated to pioneering queer and feminist film curator and critic B. Ruby Rich, one of the foremost advocates of the work of La niña santa's director, and much other queer New Argentine, and Latin American Cinema.

Rich's career is justly being celebrated at a screening and discussion event taking place between June 21-25, 2017, at the Barbican Cinema (and other London venues) as part of its 2017 Film in Focus season. The event is entitled ‘Being Ruby Rich’ and is co-sponsored by Film London and co-curated by Club des Femmes, the queer-feminist film curating collective. La niña santa (a film championed by Rich, alongside Martel's other films) will be screened with an introduction by Sophie Mayer at the Barbican Cinema on Sunday, June 25, at 6pm.

For further information about these events, see here.


Today, Film Studies For Free celebrates the much-awaited visit to London of B. Ruby Rich (foundational film critic, festival programmer, cultural theorist, and chronicler of social trends on screen and off), on the occasion of a magnificently merited celebration of her career at the Barbican and other venues, organised by Club des Femmes, the queer-feminist film curating collective (check out their interview about their work here).

The entry celebrates, as usual, in film studies links, beginning with a new video resource (above) on one of the films to be screened in this celebratory programme, and then lots of other rich Rich-related resources (below), followed by a roundup of recent Open Access Screen Studies Items, including numerous new journal issues online.

FSFF also wanted to share the great news that, from September 1, 2017, its author will be taking up the post of Professor of Digital Media and Screen Studies at Birkbeck, University of London, an institution with a longstanding and wonderful record of supporting open access publishing and widening educational access, in part through film curating study and practice! Birkbeck Institute for the Moving Image is also co-host of one of the free events celebrating Ruby Rich's work, taking place on June 21, 2017.

By (or Featuring) B. Ruby Rich: 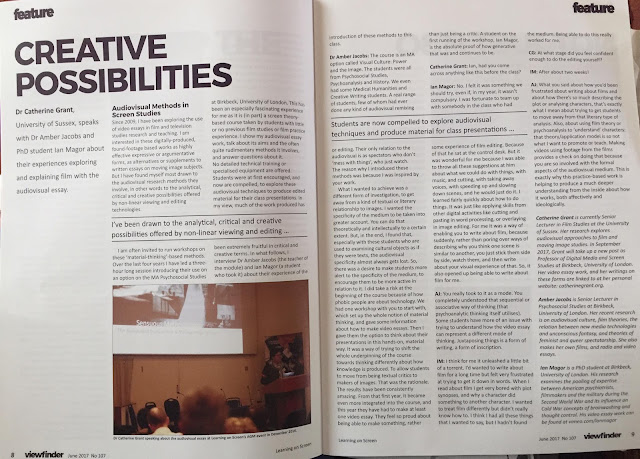 Posted by Catherine Grant at 12:17 No comments:

'The most exciting aspect of Bondanella’s work is, in fact, his inextinguishable faith in the power of reason and systematization which reminds us in a nostalgic way of methods and choices inspired by respect and harmony.’ Federico Fellini


Sad news has reached Film Studies For Free of the death of Italian cinema and culture scholar Peter Bondanella on May 28th. Bondanella was Distinguished Professor Emeritus of Comparative Literature, Film Studies and Italian at Indiana University. He made many essential contributions to his fields during a career that spanned over four decades, most notably for our discipline, perhaps, his foundational volume Italian Cinema: From Neorealism to the Present, first published in 1983, and his  later reworked version of that book A History of Italian Cinema (2010).

FSFF marks Bondanella's brilliant career as well as his passing by rounding up some links to online works about him (including Gino Moliterno's wonderful obituary), as well as by him (including his magnificent recent contribution to the above embedded conversation about Fellini - who earlier had very nice things to say about Bondanella's own work, unsurprisingly).

As further tributes to Bondanella go online, these will be added below.

Also see:
Posted by Catherine Grant at 15:34 No comments: