FALLING: 3 x Girls in Uniform
A comparative videographic study by Catherine Grant showcasing the repetitions and variations across two sets of corresponding sequences from the three direct film adaptations of Christa Winsloe's MÄDCHEN IN UNIFORM (aka RITTER NÉRESTAN and GESTERN UND HEUTE, 1930-32). Video first published at MEDIÁTICO in December 2019, alongside a great text on the Mexican adaptation by Roberto Carlos Ortiz.


Better late than never, so they say. But it is especially late for this to be the very first, as well as the very last, blog entry of 2019 at Film Studies For Free...

What else can this blog's author say, but sorry / not sorry for being distracted by an incredibly busy year spent in hot pursuit of other excellent open-access screen studies initiatives - all listed immediately beneath this introduction.

It has also been a year of tremendous loss for many, especially, it seems, in the realm of film and moving image studies. So this end of year/end of decade FSFF post has a somewhat sombre tone and distinctly commemorative content. It offers warm tributes in links to the work and lives of the two foundational film scholars-filmmakers who sadly died late in 2019: Thomas Elsaesser and Peter Wollen. We owe them so much. It also offers a further deeply-heart-felt tribute to a brilliant young film scholar who, in February of this year, died way too soon: Katharina "Kat" Lindner.

FSFF's author had the great fortune, honour and pleasure of meeting all three of these wonderful contributors to our discipline. She sends much love and sincere condolences to their partners, families and close friends. As further online tributes to these scholars appear, the entries below will be updated.

Other huge film studies losses, in this cruel year, have included Edward Branigan and Eileen Bowser.

Below FSFF's tributes, this end of year entry continues with this blog's customary lists of links to some of its favourite open-access film and moving image studies resources from 2019.

Film Studies For Free wishes all of its readers and viewers a happy and healthy 2020! It hopes to see a lot more of you in the next decade!

I still can’t believe Thomas Elsaesser has died. A foundational and inspirational figure in our field - and for me personally, especially given his utter dedication to open access publishing, both by his own example, sharing so many of his publications at his website, as well as as a hugely important figure at Amsterdam University Press.

I met Thomas in 2001 at the Forever Godard conference and remained in touch. In the last years, especially, I got to spend time with him in person quite a lot as our paths crossed on many conference trips and he visited the institutions I have worked in numerous times, including to screen his lovely film The Sun Island. From his work on melodrama, authorship (his Fassbinder book, linked to below was a huge influence on my work), media history and archaeology, through to, latterly, research by film and video practice, he was always leading the way. He was hugely supportive of Film Studies For Free over the years, and of the scholarly endeavour of videographic  approaches to our discipline, in which he was also a pioneer (see below).

Where will we go now, Thomas?

Thomas Elsaesser - Including a list of Publications (many downloadable as PDFs)

Film Theory: An Introduction Through the Senses


Online Interviews (more to be added)

Essay Film Festival 2018: Thomas Elsaesser in Discussion with Erica Carter
about his 2018 film The Sun Island

I only met Peter Wollen once in real life - also at the 2001 Forever Godard where I met Thomas Elsaesser and other foundational film scholars. But I encountered him in my head many many times, and will continue to do so. His work - particularly his  brilliant filmmaking explorations with Laura Mulvey, and the second edition of his book Signs and Meaning in the Cinema, with its groundbreaking arguments about film authorship and 'patterns of energy cathexis' - were of huge importance to my own writing, teaching, and also filmmaking. His 2001 account of cinephilia in "An Alphabet of Cinema" (NEW LEFT REVIEW, 12) is even more of an influence on what I and others are doing now in our video essays and works of creative criticism. I am very much looking forward to the cinematic re-release of Friendship's Death, his 1987 solo-directed essay film, in 2020, and feel sure that Wollen's work, with its timely prescience, will endure in many ways that we cannot yet predict.

Work about Wollen's Research and Filmmaking

Charles Esche,'What does it mean to say that feminism is back? A reaction to Riddles of the Sphinx', Afterall Journal, 15, Spring/Summer 2007


Laura Mulvey on RIDDLES OF THE SPHINX (Mulvey and Wollen, 1977)


Kat Lindner is missed so acutely by so many in her twin worlds of football and film studies. I met her only once in person, a few years ago, though we corresponded about our work over the years. She came to an event in Glasgow at which I was talking, as usual, about video essays. She was a razor sharp, deeply original thinker, with a truly glowing presence. Afterwards we talked for a long time - me trying to convince her, and almost succeeding, I think, that her fabulous work on queer cinematic phenomenology would translate brilliantly to this audiovisual format if only she would take it up. It was an exhilarating conversation and I wish it hadn't had to end. Even before that memorable encounter, I loved her work (especially her path-breaking 2017 book Film Bodies: Queer Feminist Encounters with Gender and Sexuality in Cinema), and used it in my own research directly and indirectly. One day I would like to make a video essay about her writing - but I haven't been able to yet.

'Towards a Queer Feminist Vernacular: Dr Katharina Lindner’s Film Bodies'
by Jenny Chamarette and So Mayer with Davina Quinlivan, MAI: Feminism and Visual Culture, May 15, 2019 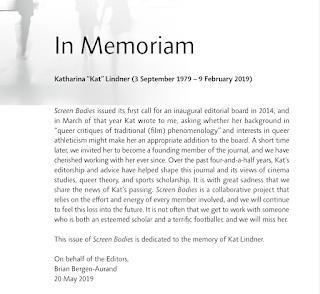 ‘Fighting for subjectivity: Articulations of physicality in Girlfight’. In Journal of International Women’s Studies, 2009, Vol.10, No.3, pp.4-17. [pre-print]

Jennifer Proctor for 'Am I Pretty? and a “Sonic Gaze”', [in]Transition: Journal of Videographic Film and Moving Image Studies, 2019,  plus her article 'Teaching avant-garde practice as videographic research', in Screen, 60.3, Autumn 2019; and especially for her inspirational continuing work on the inclusive teaching initiative, EDIT Media (Equity, Diversity, and Inclusion in Teaching Media), http://www.editmedia.org

'“Our Bravest and Most Beautiful Soldier”: Pola Negri, Wartime and the Gendering of Anxiety in Hotel Imperial', by Elisabetta Girelli, in Film-Philosophy's special issue on Stardom and Film-Philosophy (23.2, 2019), edited by Lucy Bolton

Most Missed Online Journal That Stopped Publishing in 2019

Cléo: A Journal of Film and Feminism
(Read about its demise here. But, thanks to the generosity of filmmaker Barry Jenkins, you can purchase a compendium of the best writing in its six year run).

The Structures of the Film Experience by Jean-Pierre Meunier:
Historical Assessments and Phenomenological Expansions
By Julian Hanich and Daniel Fairfax (Amsterdam University Press, 2019)

Favourite Film Studies Blog (as Ever)

Observations on Film Art by David Bordwell and Kristin Thompson


Will DiGravio's The Video Essay Podcast


Poor Jesse by Jason Mittell,
Part of "The Chemistry of Character in BREAKING BAD: An Audiovisual Book"


Favourite Collection of Online Video Essays (Not Published by FSFF) 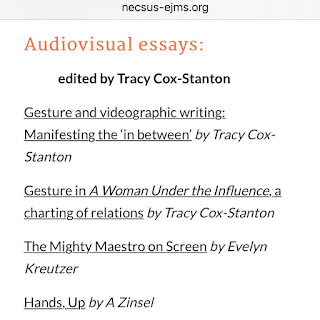 In an excellent new issue of NECSUS European Journal of Media Studies, Autumn 2019, devoted to treatments of gesture, came this collection of three excellent video essays in a section edited by Tracy Cox-Stanton: (scroll down)‬

14 of Film Studies For Free Video Essays Published in 2019

Posted by Catherine Grant at 17:54 No comments: