A Stocking Full of eReading and Viewing: Happy Holidays!

'Tis the season to be jolly, apparently, and so Film Studies For Free is happy to oblige with some extremely jolly, serious, and completely free eGifts for the festive season, ones from wise men and women around the world. You can find them liberally scattered in list form, below, under the six headers in bold.

This bountiful blog will be back early in the New Year with its list of Best Online (and Open Access) Film Studies Resources in 2012. So, if you haven't taken part in the readers' poll for that yet, you still have a little time.

In the meantime, FSFF wishes you very happy holidays indeed!

The first array of eBook publications from SEQUENCE Serial Studies in Media, Film and Music has just been launched — a central element in REFRAME and SEQUENCE’s particular model of academic ePublishing.


You can now read SEQUENCE 1.1 — Steven Shaviro’s magisterial and open access article about a film about the end of world (‘MELANCHOLIA, or, The Romantic Anti-Sublime‘) — in a variety of free eBook formats. Just click here to check them out and download them to your devices.

Leshu Torchin's current research focuses on how screen media bear witness to human rights abuses and genocide in order to mobilise audiences. In her guest post for RE.FRAMING ACTIVISM, Torchin introduces some of the issues that are central to her new book, Creating the Witness: Documenting Genocide on Film, Video, and the Internet. Thanks to Torchin and the book’s publishers University of Minnesota Press, REFRAME has been granted the permission to share the extensive introduction to the book online. You can read it here.

NETWORKING KNOWLEDGE: Journal of the MeCCSA-PGN, Vol 5, No 3 (2012): The Biographical Narrative in Popular Culture, Media and Communication

THE CINE-FILES: A Scholarly Journal of Cinema Studies, Issue 2, 2012

AUDIENCES - a wonderful new book from Amsterdam University Press and a bumper new issue of PARTICIPATIONS!

This timely volume engages with one of the most important shifts in recent film studies: the turn away from text-based analysis towards the viewer. Historically, this marks a return to early interest in the effect of film on the audience by psychoanalysts and psychologists, which was overtaken by concern with the 'effects' of film, linked to calls for censorship and moral panics rather than to understanding the mental and behavioral world of the spectator. Early cinema history has revealed the diversity of film-viewing habits, while traditional 'box office' studies, which treated the audience initially as a homogeneous market, have been replaced by the study of individual consumers and their motivations. Latterly, there has been a marked turn towards more sophisticated economic and sociological analysis of attendance data. And as the film experience fragments across multiple formats, the perceptual and cognitive experience of the individual viewer (who is also an auditor) has become increasingly accessible. With contributions from Gregory Waller, John Sedgwick and Martin Barker, this work spans the spectrum of contemporary audience studies, revealing work being done on local, non-theatrical and live digital transmission audiences, and on the relative attraction of large-scale, domestic and mobile platforms. [Publisher's blurb for Audiences: Defining and Researching Screen Entertainment Reception, ed. by Ian Christie (Amsterdam: Amsterdam University Press, 2012)]


Film Studies For Free is delighted to pass on news of the publication of an open access version of a wonderful new book from Amsterdam University Press. Audiences: Defining and Researching Screen Entertainment Reception is an extremely high quality collection edited by Ian Christie, Professor of Film and Media History, at Birkbeck, University of London. This great tome has, of course, been added to FSFF's permanent listing of Open Access eBooks. Please support its generous publisher and author by ordering a copy for your university library!


Since we're on the subject of audiences, it seems a brilliant moment to reproduce, below, links to the incredibly rich contents of the latest, just published, issue of PARTICIPATIONS, the excellent online journal of audience research. Not all items are directly film studies related, but they should be of interest to all researching issues of reception in film and media culture.

Posted by Catherine Grant at 11:50 No comments:


Film Studies For Free brings you glad tidings of a new issue of Senses of Cinema. All the contents are linked to below. FSFF hasn't pored over all of these yet, but so far the standout piece of interest may well be Haneke scholar extraordinaire Roy Grundmann's article on the Austrian filmmaker's latest film, which argues that


[Amour]’s particular take on the moral tale becomes clearer when we compare it to the moral tales of French New Wave filmmaker Eric Rohmer. As Rohmer explains, the conte moral does not pivot on characters’ actions, but on their inner conflicts and on how characters rationalize their motivations that arise from these conflicts. It has been noted that Rohmer’s films, like many examples of the Nouvelle Vague, are filled with dialogue in which the protagonists verbalize their feelings, perceptions, and mental states. Haneke’s new film harkens back to this pattern.

FSFF also liked Marc Saint-Cyr's take on one of its favourite films Fanny and Alexander. And there's lots more that catches the eye in this issue....

Posted by Catherine Grant at 14:20 No comments:


Film Studies For Free presents the second of its celebrations of the centenary of the birth of Italian filmmaker Michelangelo Antonioni. Below are embedded the video recordings of a number of unmissable talks at Antonioni and the Arts, an event held at Royal Holloway, University of London, in October to mark the anniversary.

Thanks to Royal Holloway's School of Modern Languages, Literatures and Cultures for hosting the talks, as well as taking the trouble to record them and make them freely available online.

Who knows? Maybe there'll be some more videos to embed here at FSFF! Hope so! In any case, You can see the first FSFF Antonioni anniversary celebration here: Sculpting the Real: Michelangelo Antonioni Studies in the Centenary Year of his Birth.

The centenary of the birth of this master of European modernist cinema was a chance to bring together a number of scholars and curators who have a particular interest in the interdisciplinary aspects of Antonioni’s oeuvre. Dr Laura Rascaroli (U. of Cork) and Dr John David Rhodes (U. of Sussex), who edited the 2011 volume, Antonioni: Centenary Essays, offered a novel perspective on the work of the Italian film-maker by focusing on the influence of art and architecture respectively. The two talks were preceded by a screening of two rare Antonioni documentaries: Gente del Po (1943-7) and Lo Sguardo di Michelangelo (2004). Documentaries are a very important but often less studied aspect of Antonioni’s production. They also ideally frame his career since Antonioni began as a documentary film maker and ended his cinematic career with his tribute to the master of the Italian Renaissance, Michelangelo Buonarroti, in a short film of extreme beauty which helped the audience to reflect upon art and tradition. The general discussion that followed covered a number of fascinating topics relating to Antonioni’s practice, including his consistently ‘open’, physical engagement with the human figure, as compared, for example, with that of Jean-Luc Godard.

Part 2.a, Windsor Lecture - Antonioni and the Arts @ Royal Holloway, University of London from SMLLC, Royal Holloway, London on Vimeo.
Prof. Dominique Païni's presentation of the retrospective 'Antonioni And The Arts. The Gaze of Michelangelo' and lecture. Introduction by Prof. Williams James.

The second part of the study day was a lecture by film scholar and curator, Professor Dominique Païni (École du Louvre, Paris), who presented with slides his plans for the forthcoming centenary exhibition on Antonioni in his home-town of Ferrara. Prof. Païni revealed that the physical challenge of the exhibition space, the Renaissance Palazzo dei Diamanti, created the opportunity to present Antonioni’s work as a series of contrasts arising from the idea that cinema is, after all, narrative sculpture in movement, and that shapes are born out of the most basic contrast, that of light and dark. Both the lecture and ensuing discussion brought into focus a series of important characteristics of the work of Antonioni: the identification of women and the nation, ideal masculinity and Italian art and tradition, the critique of humanism and the classical heritage, and the ambiguous relationship between Antonioni and Italy’s post-war tradition of social and political engagement (impegno) which characterised the work of many of his contemporaries working in film and literature.

Part 2.b, Windsor Lecture - Antonioni and the Arts @ Royal Holloway, University of London from SMLLC, Royal Holloway, London on Vimeo.
A few reflections with Professor Dominique Païni. Translation in English by Alix Agret.
Posted by Catherine Grant at 14:40 No comments: 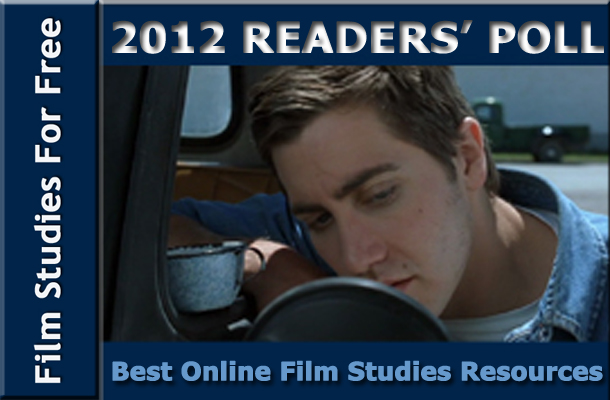 
One of FSFF's most popular and most useful blog entries last year was its December 20 roundup: FSFF's Favourite Online Film Studies Resources in 2011.

It will repeat this endeavour this year. But FSFF will make things much more interesting, hopefully, by inviting readers' suggestions, and trying to reflect the views gathered in the results.

Below are last year's categories. Please feel free to respond to these headers or suggest new ones (FSFF will itself inaugurate some videographical/multimedia film studies categories, for example).

You can leave suggestions in the comments below, tweet them to @filmstudiesff, leave them at the Film Studies For Free Facebook page, or send your nominees to FSFF by email. Please feel free to self-nominate!


Lots of love from