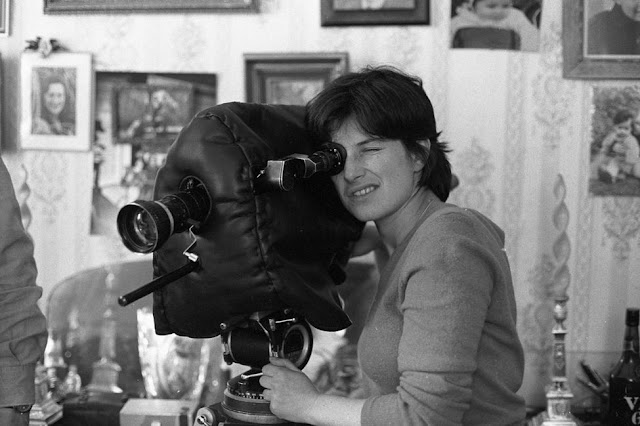 Akerman’s search for images that represent nothing, and mean nothing else (except perhaps themselves – and even this is difficult enough) while she focuses her camera on observing the minutiae of women’s lives, is expressed in the first instance by her style: distant, clean, sober, looking at the image outside of the image. Rootless, detached images. Images in the Diaspora. Is it possible to return home, to where the image can exist, outside of the commandment? Is such an image even possible? (Dana Linssen on Akerman's filmmaking)

Despite their apparent simplicity, Akerman’s assured framing and narrative, built out of blocks of real time intercut by radical ellipses, are not easily replicated. Rather, the film’s impact is indirectly evident in the emergence of a new phenomenological sensibility and approach to observation and the weight of time... (Ivonne Margulies on Jeanne Dielman, 23, quai du Commerce, 1080 Bruxelles)

Links to online, freely accessible studies of her work and to tributes to it will continue to be added below in the next days (as they will, undoubtedly, at KeyFrame Daily | Fandor, and elswehere). It's the only way that Film Studies For Free can process this news.... Incroyable....


By / With Chantal Akerman


BERLIN: Testimony of a City by Andy Moore and Ian Magor
Using Chantal Akerman's News from Home [1977] here the city of Berlin is the stage for another journey through another city. Reflective and reversing timelines encourage the visual to interact with the spoken testimony.

Ripples from Ian Magor
The portrayal of desire on the cinema screen is necessarily problematic. Too often it is an assertion of masculine power, sometimes an idealised notion of romance, rarely the reality of sagging mattresses and aching muscles. Chantal Akerman's Je, tu, il, elle is set alongside two typical Hollywood portrayals of sexual passion.


Slow / Motion from Daniel Mcilwraith and Jessie McGoff
The personal and the public. Private letters and open spaces. Home, exile. Chantal Akerman’s News From Home is often torn between personal introspection and visual ethnography. Here, its slow composure is put in to conversation with the chaos of Godfrey Reggio’s Koyaanisqatsi. Whilst the former tackles the personal and transcends towards the universal, the latter uses the universal to invoke a self-observating experience. If Koyaanisqatsi signals a life out of balance, News From Home tries to rectify that balance - in pace, in space and in the everyday. - Jessica McGoff

Chantal Akerman: Too Far, Too Close (Eng) from ARTtube on Vimeo.
Chantal Akerman: Too Far, Too Close (Eng) from ARTtube
Belgian director Chantal Akerman gained world success with her masterpiece Jeanne Dielman, 23 Quai Du Commerce, 1080 Bruxelles (1975) and consolidated her reputation with films like Toute une Nuit, Les années 80 and Le Marteau. In the early nineties Akerman shifted her career from strictly film into the arts. She participated, amongst other exhibitions, at dOCUMENTA 10 and 11. It dated from 1995 since Akerman exhibited in her native country with a massive retrospective. In Too Far, Too Close the M HKA presented an overview from Akermans oeuvre starting with the 1968 production Saute ma Ville and ending with her most recent work, Maniac Summer.
Posted by Catherine Grant at 11:40

I went to see 'No Home Movie' at the Regents Street Cinema on Friday. Akerman was due to be there so it was doubly poignant to watch this simple film about her mother's last months through the lens of Akerman's own death. At one point, a typically long shot shows mother and daughter silhouetted together in her mother's darkened living room, resting on different sides of the room, making it feel like a kind of ante-chamber of mortality. At another ,Chantal and her sister, Sylviane, are trying to keep their mother awake in her chair by asking her to tell a story of what she did yesterday - it seems desperate but then tSylviane and her mother manage to tell a very funny anecdote together about a woman they saw with a very large bosom and an very small dog who was licking her thoroughly, at the conclusion of which the mother rallies to remark "By now she must have polluted the whole of Brussels". The whole film which I found very compelling is a subtle blend of melancholia and humour which very movingly portrays the intimacy of everyday life in Akerman's family and the enormous affection between mother and daughters.

Thanks for sharing your story of your viewing of this film, Lizzie. I saw (and loved) NO HOME MOVIE very shortly before hearing the news of Akerman's death, and so the seeing of it bled into my shock and sorrow at that news. Your comment makes me want to watch it again. And again. Thanks for taking the time to post it.