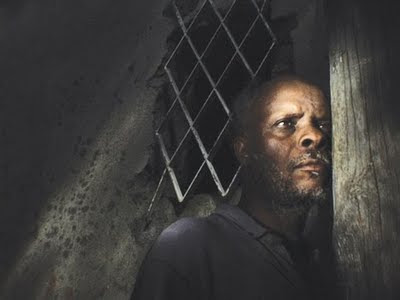 The Rabbit Hunters by Pedro Costa (one of three episodes of a 2007 project created by the Jeonju Film Festival to produce and distribute short films created in digital format and directed by three directors with complete creative freedom. The other episodes are Respite by Harun Farocki and Correspondences by Eugène Green).

Watching any of Pedro Costa’s films grabs hold of our gaze and forces us to personally experience the motion of the film. At times his scenes sting our eyes with their piercing pain, and at times they wrap our eyes in ineffable tenderness. [Shigehiko Hasumi]

Like his European contemporaries Ulrich Seidl and Harun Farocki, Portuguese filmmaker Pedro Costa is a veritable pioneer in the fusion of documentary and fiction. As London's Tate Modern museum is about to embark on its fantastic retrospective of the whole of Costa’s oeuvre (at the Starr Auditorium from 25 September–4 October 2009), the ever-timely Film Studies For Free presents its own retrospective of links to valuable (mostly English-language) work about him published online.
Whenever it can, FSFF stands on the shoulders of giants: on this occasion, welcome lifts were given by Girish Shambu, Michael Guillén, David Hudson, HarryTuttle, and Ryland Walker Knight with their respective links lists and discussions or interviews around the time of North American retrospectives of Costa's works and the 2009 Cannes Film Festival. Thanks a lot, guys.

FSFF's London readers should also note that Costa will give a talk called 'Thoughts on Films' at Birkbeck College, associated with the Tate retrospective at 7.30pm on Tuesday 29 September (further details HERE).
And, finally, at the very foot of this post, for its francophone readers, FSFF has embedded two rather enlightening segments from a wonderful video interview with Costa (in unsubtitled French) at Cannes in 2009.

Pedro Costa Rushes 2/2 from Independencia on Vimeo.
Follow Film Studies For Free on Twitter
Posted by Catherine Grant at 13:00

Sometimes lacunae are better than plain errors, specially in blogs of a pedagogical nature. I find this phrase very very hard to digest: "Like his European contemporaries Ulrich Seidl and Harun Farocki, Portuguese filmmaker Pedro Costa is a veritable pioneer in the fusion of documentary and fiction." Seidl and Farocki pioneers in the fusion of documentary and fiction?!? Why, when, how? If even Pedro Costa can hardly be considered a pioneer... but at least him has films that somewhat correspond to that "fusion"; Farocki, although an amazing director, has not. Seidl doesn't matter anyhow, cause he's a horrible abusive director.

Thanks for expressing your opinion, André. I'm no specialist in the work of these three directors, but I have read the work about all three of them that I have listed in this blog, and I would stand by my comment, even if it is a little 'looser' in expression than I would like now that you've challenged my words. My interest in all three filmmakers (and I certainly don't like the work of all three equally -- or at all in the case of the films of Seidl) comes from the fact that all three are contemporary, and very different, experimenters with 'staging' in their direction (I research and write about forms of auteurism when not behind the Film Studies For Free mask) - albeit ones following on from -- but pushing further than -- earlier pioneers in this exploration. I hope FSFF readers will add their comments to ours, but also that they discover your website - Ainda não começámos a pensar/We have yet to start thinking (http://bit.ly/1q3RTp) - through your comment as I've been happy to do.

Thank you Catherine for not taking my harsh "opinion" personally :) I nonetheless always find it very hard to understand how can one "think" about films one doesn't like, except if what one doesn't like is precisely what needs to be thought of... On the fusion of documentary and fiction, and please let's not enter in the "who came first" game, if those you've mentioned are to be considered pioneers, what is Kiarostami then, to mention an obvious example? If you allow me one cinephile suggestion, an incredible contemporary and not so well known "experimenter with 'staging' in direction" is the Cambodian Rithy Panh.

I disagree with the new topos fad of film critics who say we can't call film either documentary or fiction because that limit is challenged (as if Flaherty never existed). It's the point of all cinema to play on the fence, at some degree... There is never pure documentary when a camera crew steps on reality.
How is Vanda less of a documentary than any reportage we watch on the news (staged/edited/influenced)?

Thanks for joining us, Harry. Yes, on one level, none of this is new (I agree with Harry about the precursors, of course - would add a few obvious others like early Visconti and Herzog), and so 'pioneer' is the wrong word. And yet a lot of what I am referring to is new, at least in relation to how the discourses of fiction/ documentary fusion are now being deployed to orient or direct our spectating (I am writing a book precisely on this topic at the moment, but some reflections of mine have been published already in a [non-open access] tome on Film and Television After DVD [eds. Bennett and Brown]). In a section of the book version of this work on contemporary auteurism, I am particularly interested in Seidl, Winterbottom, and Reygadas (among other directors) and matters of so-called'real sex' in fiction films. On a different note, I'm a big admirer of the Makhmalbafs, as well as Kiarostami (all the subjects, of course, of future FSFF posts), and love the words of the latter on these matters that Jonathan Rosenbaum cites in his essay on Costa listed above: 'In my mind, there isn’t as much of a distinction between documentary and fiction as there is between a good movie and a bad one.' The suggestion you make, André, about the films of Rithy Panh sound like the the former kind, and I very much look forward to following up your cinephilic generosity.

In France they call the documentary/fiction distinction "la tarte à la crème". Somehow, we can't call anything either documentary or fiction, because the line is blurred for ever, since recently. I don't think this question matters any more for this new "docu-fiction" trend than ever before. The question about "manipulation/transcendence of reality" matters just as much for "pure" documentaries and for "pure" fiction (where this fusion is not ambiguous).

Likewise, does the technicality of "real-sex" really matter to the "truth of cinema"? It's a topic for social studies, to explore the lives of performers on set. Does it matter if actors fake it for the camera, but get it on in their backstage trailer? Isn't sex in real life a big show anyway (simulation)? Could an external observer make a pertinent classification between acting and prostitution?

Thanks so much for the Rithy Panh suggestion. I have really enjoyed following up on it - there's a lot of his work and many video interviews, etc, freely available online, so I have started publicly collecting links to these at http://delicious.com/filmstudiesforfree/Rithy_Panh

Harry, thanks too for your comment about the technicality of "real-sex" and the "truth of cinema". I'll respond more fully on my Directing Cinema blog as soon as I can and will comment again here once I've done so.

Well, I'm curious to read what you'll say about what "real-sex" brought to cinema. Please let me know when it's available.

Hi Harry, just a quick response. "Real sex" brings nothing new or different, in your terms, to cinema than, say, Herzog does when he directs Kinski to perform all the push-ups at the beginning of Woyzeck (1979). I agree completely, in your terms and in answer just to the questions you ask, that "real sex" in movies is a technicality. As you will see, though, I also ask further and different questions from you about the matters of, both, "technicalities" and "cinema". I wIll let you know when I've put up a longer consideration!