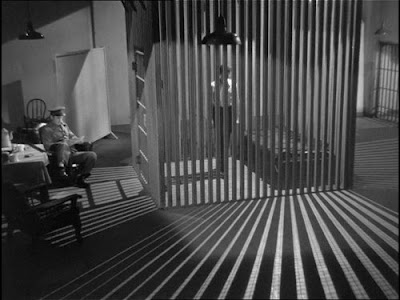 Image from You Only Live Once (Fritz Lang, 1937)
Film Studies For Free is extremely fond of the work of V. F. Perkins, world-renowned author of Film as Film (London: Penguin Books, 1972 - see an recent interesting review HERE).

FSFF has previously drawn attention to two pieces of Perkins' hugely influential work which are freely available online:
Today, it is delighted to bring to its readers' attention a further Open Access essay by Perkins which is currently stored at WRAP: the Warwick Research Archive Project.

The piece is an as yet undated and otherwise unpublished article entitled 'You Only Live Once' that brilliantly treats this magisterial 1937 film directed by Fritz Lang.

Here's an excerpt from the essay with relevant hyperlinks added by FSFF:

Anyone who wants to write usefully about You Only Live Once has to build on the work of George M Wilson. A chapter in [Narration in Light: Studies in Cinematic Point of View (Johns Hopkins University Press, 1986)] makes a systematic presentation of the movie’s narrative strategies, and a detailed reading of key images. Wilson shows how Lang’s picture is designed to educate its viewers in the manipulability of the image, and to demonstrate the power of the film sequence to deceive us by obscuring key points in its story and by soliciting preferred readings that the content of the images may not in fact guarantee. The achievement that Wilson uncovers is the more remarkable in that it occurs not in an illustrated lecture but in a fiction movie, one that works to powerful effect within its genre of social protest melodrama.

Wilson’s essay opened my eyes to You Only Live Once, a movie that I had previously found opaque because, apart from its evident social project, I had not seen a purpose in its meticulous design beyond that of giving power and plausibility to a noticeably contrived tale. In what follows I take for granted the main lines of Wilson’s argument in order to develop some remarks on Lang’s mise-en-scène in two representative sequences.

Posted by Catherine Grant at 15:27

Wow! A fantastic find for all VF-philes, many thanks ! Maybe this was a Warwick lecture text? If so how many more must there be ! I'm drooling at the throught ...