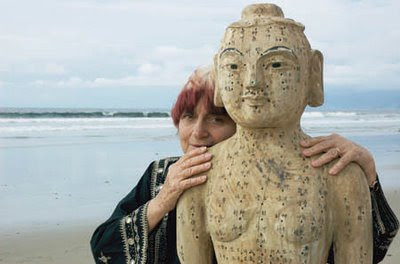 Film Studies For Free is working on a longer post on video essays, but it had to rush to its readers, in the meantime, with the hot news of a great podcast interview with French director and film essayist Agnès Varda by a longstanding admirer and acquaintance of hers, radio journalist Ruth Seymour for the Politics of Culture slot at KCRW. Their principal topic of conversation was Varda's latest documentary Les Plages d'Agnès/ The Beaches of Agnès (France, 2009). The interview has been online since yesterday and FSFF sends its thanks for the rapid tip-off to Sasha Berman.

The podcast can be accessed at the KCRW website by clicking HERE. For those interested the English-language press kit (pdf) for The Beaches of Agnès can be accessed HERE. See also Nick Dawson's great recent interview with Varda for Filmmaker Magazine HERE.

Below is an FSFF selection of links to highly worthwhile and freely-accessible online material pertaining to this great filmmaker.

Video essay by Varda (in French):

'In 1975, it was the Year of the Woman. [French TV channel] Antenne 2 asked seven female filmmakers the question : “How does it feel to be a woman?”. They had to answer with a seven-minute movie. Agnès Varda chose to answer with the cine-leaflet “Réponses de femmes”. It is a possible answer concerning women’s bodies and the feminine condition. In this short movie, women, from female children to old women, chat about sex, desire, advertising and children (to have some or not) : “our object-body, our taboo-body, our body with or without children, our sex, etc...”. How can we experience our body? How can we experience our sex? On a white set, women, dressed or naked, try to answer the question “What is a woman?”. One answers: “To be a woman is to be born in a female body”. Nothing more, no idea of feminine essence, or predisposition to motherhood, ideas against which the feminist movement was struggling. A pregnant and naked woman, dancing and laughing loud, made a lot of viewers react : Antenne 2 got a lot of written reproaches. This cine-leaflet was aired on Antenne 2 the 23rd of June 1975. It was also nominated to Cesars 76, category documentary short-movie.' By Feminism in Cinema weblog.

Posted by Catherine Grant at 11:19