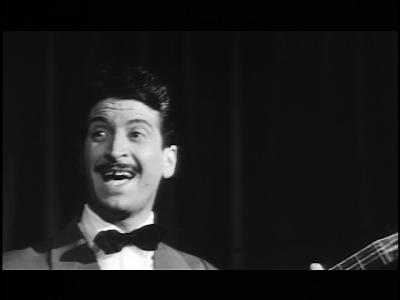 Mystery Man in Les Bonnes femmes (1960)
It's a really B I G D A Y here at Film Studies For Free. But do, please, be gentle...
This posting brings you the first ever little video essay about a film studies topic (in this case, a single film) produced by this blog's author: Unsentimental Education: On Claude Chabrol's Les Bonnes femmes.
The exercise probably only shows that there's a mighty long way to go with this format for this author before anything near full proficiency in it can be claimed (for example, the voiceover commentary would have sounded a lot better had the person delivering it not been quite so nervous/terrified during the recording). But it's a good enough beginning for what FSFF sincerely hopes will go on to be a regular, if occasional, feature.
The essay has been produced, as previously promised, to coincide with, and thus to contribute to, the final day of the wonderful Chabrol blogathon hosted by Flickhead's blog (see HERE for a list of all the fantastic contributions, so far, to the event).
Some supplementary material about this strange, beguiling film Les Bonnes femmes/The Good Time Girls (France/Italy, 1960, directed by Chabrol), together with a link to a full transcript of the video essay's commentary and some pedagogical and critical reflections on the process of making it, wlll be added to this post as soon as possible. So, do please come back for that. (Updated July 8, 2009: transcript accessible HERE).
But, time was of the essence to join in with the blogathon. So all else can wait. Here below, then, is the essay, archived at FSFF's new supplementary site, for related videos, at Vimeo. It contains a few significant plot spoilers (as few as possible...). Also, please note that, for the purposes of its critical-scholarly analysis and commentary, the essay transforms many of the original elements of the film that it 'quotes', employing newly created still images (and new sounds), slowed motion, and quite heavy (at times) re-editing (including reordering) of image and sound/music.
In other words, you must see the original film, if you haven't done so already. Les Bonnes femmes is currently available on DVD thanks to Kino Video (Region 1 only). It can be ordered from that company's website HERE, or from Amazon.com HERE

Terrific video essay on my favorite Chabrol. Thank you.

Oh, this is just wonderful. My partner has been trying to get me to do some video essays for my blog, but I just haven't got it together yet. This is a bit inspiring! Seems like a great way to get the information across. I'll look forward to your thoughts about the process, but I'd love to know what software you used for starters...

Excellent work, Catherine. I appreciate the way you approached the climactic scene, which fascinated and shocked me the first time I saw the film. (Along with Mario David banging his head on the table.)

You don't sound nervous at all; your voice is perfect for the video essay format. Thank you for making this.

Cheers on the video.

If you don't mind the question, how did you like the process of creating it? Seems like it would be fun (if a bit frustrating at first).

An incisive reading of the film, Catherine. Les bonnes femmes was a favorite of mine when I first learned about the New Wave -- it's a fascinating study of urban Paris and class, and there's a menacing, tragic quality to it. I particularly liked your emphasis on freedom and captivity.

Thanks for the lovely comments, guys. I'm off out to enjoy my birthday in the open air today, away from computer and film screens, but will be responding to the 'how-to' questions in the next couple of days when I write a little reflections on the 'Making Of' essay, together with other material on Les Bonnes femmes. It's my favourite Chabrol, too - I hope that shows...

This is a wonderful video essay and like (almost) everyone else, on my favourite Chabrol film. It has inspired to start work on one of my own.

I too truly enjoyed this video essay. I suppose the best thing I can say is that it made me want to see the film.

@Richard:Same here. This essay makes me want to see the movie, which I guess makes it a good one!