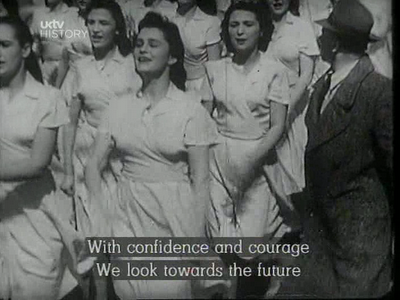 Film Studies For Free concurs with David Bordwell's recent assessment that Adam Curtis is one of the most remarkable documentarians working today ('Adam Curtis’s The Power of Nightmares, [is] one of the great docs of recent years').

If you haven't yet heard of him, Curtis is a British television documentary producer who has written and directed a number of hugely influential, multi-part, political film essays, including the award-winning Century of the Self, the aforementioned The Power of Nightmares, The Mayfair Set, Pandora's Box, The Trap and The Living Dead.

FSFF was really excited, therefore, to hear of Curtis's new blog hosted at the BBC website (news courtesy of David Hudson at The Daily and also from a nice post at the great Screen Research website, which FSFF promises to profile in more detail really soon).

Curtis's blog muses mostly about his new project which Charlie Brooker, writing for The Guardian, describes as follows:

He's made a new documentary called It Felt Like A Kiss. Except it isn't just a documentary. It's also a piece of interactive theatre, with music composed by Damon Albarn and performed by the Kronos Quartet. And it doesn't take place in a cinema or concert hall, but across five floors of a deserted office block in Manchester [as part of the Manchester International Festival]July 2-9, 2009]. [...]

In summary, from what I can gather, It Felt Like A Kiss is both the craziest yet crookedly rational project I've ever heard about. Hearing Curtis talk about that huge subject, that huge building, that brink-of-madness, reality-blurring feel, there are a few unmistakeable parallels with Synecdoche, New York, Charlie Kaufman's recent film, in which Philip Seymour Hoffman takes control of an infinitely huge Manhattan warehouse and attempts to stage a boundary-shattering show that will sum up the entirety of human experience. He over-reaches and winds up creating a work of ever-expanding fractal madness. Curtis, I think, has gone a bit mad, too - but to precisely the right degree.

It Felt Like a Kiss started life as an experimental film I made for the BBC last year. My aim was to try and find a more involving and emotional way of doing political journalism on TV. I decided to make a film about something that has always fascinated me - how power really works in the world. To show that power is exercised not just through politics and diplomacy - but flows through our feelings and emotions, and shapes the way we think of ourselves and the world.

Film Studies For Free will, in its downtime, fantasize about a little visit up to Manchester. Meanwhile, below are some of the most interesting, freely accessible, scholarly resources, websites, and online essays about Curtis's work and related matters: