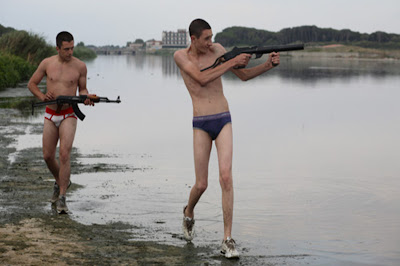 Film Studies For Free brings you a little Friday round up of just-out-now scholarly links.

Imagining torture by Chuck Kleinhans; Torture documentaries by Julia Lesage; A Simple Case for Torture, redux by Martha Rosler; The Wire and the world: narrative and metanarrative by Helena Sheehan and Sheamus Sweeney; “Don’t Just Watch It, Live It:” technology, corporate partnerships, and The Hills by Elizabeth Affuso; Postmodern marketing, Generation Y and the multiplatform viewing experience of MTV’s The Hills by Amanda Klein; The past isn't what it used to be: the troubled homes of Mad Men by Mark Taylor; Cylons in America: Critical Studies in Battlestar Galactica reviewed by David Greven; Global formats, gender and identity: the search for The Perfect Bride on Italian television by Michela Ardizzoni; A nightmare of capitalist Japan: Spirited Away by Ayumi Suzuki; The curious cases of Salma, Siti, and Ming:representations of Indonesia’s polygamous life in Love for Share by Ekky Imanjaya; Gender and class in the Singaporean film 881 by Brenda Chan; Cinenumerology: interview with Royston Tan, one of Singapore’s most versatile filmmakers by Anne Ciecko; Visible “waves”: notes on Koreanness, pan-Asianness, and some recent Southeast Asian art films by Anne Ciecko and Hunju Lee; Asia’s beloved sassy girl: Jun Ji-Hyun’s star image and her transnational stardom by JaeYoon Park; Pornography and its critical reception: toward a theory of masturbation by Magnus Ullén; Real sex: the aesthetics and economics of art-house porn by Jon Lewis; Documentary and the anamnesis of queer space: The Polymath, or, The Life and Opinions of Samuel R. Delany, Gentleman by Nicholas de Villiers; Documentary investigations and the female porn star by Belinda Smaill; The Hypersexuality of Race: Performing Asian/American Women on Screen and Scene reviewed by Catherine Clepper; Documenting and denial: discourses of sexual self-exploitation by Leigh Goldstein; Children of Men and I Am Legend: the disaster-capitalism complex hits Hollywood by Kirk Boyle; The exceptional darkness of The Dark Knight by Todd McGowan; The Dark Knight of American empire by Randolph Lewis; Post-Iraq cinema: the veteran hero in The Jacket and Harsh Times by Justin Vicari; WALL-E: from environmental adaptation to sentimental nostalgia by Robin L. Murray and Joseph K. Heumann; Clint Eastwood’s Gran Torino: the death of America’s hero by Robert Alpert; Interpreting revolution: Che: Part I and Part II by Victor Wallis; The cold world behind the window: 4 Months, 3 Weeks and 2 Days and Romanian cinema’s return to real-existing communism by Constantin Parvulescu; Retrieving Emir Kusturica’s Underground as a critique of ethnic nationalism by Sean Homer; Dimensions of exile in the videos of Silvia Malagrino by Ilene S. Goldman; No parking between signs: on Sadie Benning's Flat is Beautiful and early works by Burlin Barr; Sex versus the small screen: home video censorship and Alfonso Cuarón’s Y tu mamá también by Caetlin Benson-Allott; Torture, maternity, and truth in Jasmila Zbanic’s Grbavica: Land of My Dreams by Caroline Koebel; Culture wars: some new trends in art horror by Joan Hawkins; Misogyny as radical commentary: Rashomon retold in Takashi Miike’s Masters of Horror: Imprint by William Leung; The dangers of biosecurity: The Host and the geopolitics of outbreak by Hsuan L. Hsu; The return of horror to Chinese cinema: an aesthetic of restraint and space of horror by Li Zeng; Cross cultural disgust: some problems in the analysis of contemporary horror cinema by Chuck Kleinhans; Media salad by Chuck Kleinhans; Racing into the Obama era by the editors; Remembrance against manufactured amnesia: on the 20th anniversary of the Tiananmen Incident by David Leiwei Li. Plus several book reviews.

'Gypsy Stars in the New Europe' by Aniko Imre; 'When Satellites Fall: On the Trails of Cosmos 954 and USA 193' by Lisa Parks; 'Towards a Typology of Dance TV Contestants' by Christine Quail; 'No Rerun Nation: Canadian Television and Cultural Amnesia' by Serra Tinic; 'And the winner of Britain's Got Talent is . . .' by Lisa W. Kelly.

[According to its press release,] it’s a timely and stimulating report, confirming that film has been one of the most powerful cultural and social agents of the last 100 years. Taking 200 iconic films from the past six decades, it traces how British cinema has upheld some traditional British values – and mocked, challenged and undermined others. It shows how important film has been in sustaining and developing the identity of the UK’s nations and regions, and in reflecting the changing face of Britain’s different communities. And it charts the extraordinary power British film can wield at home and abroad – even more so with the massive economic and technological evolution film has experienced in recent years. This study highlights the cultural impact of British film. It calls on us to acknowledge and appreciate the strength, the diversity and the rude health of our film heritage and to acknowledge its increasingly vital role in contemporary culture.

Posted by Catherine Grant at 09:15