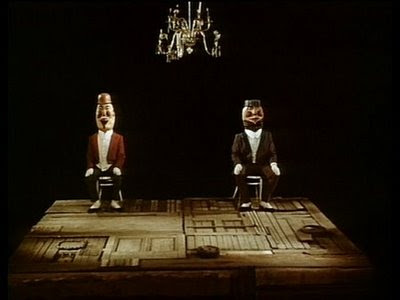 A quickie from Film Studies For Free today just to shout out about two of the best film studies blogs out there which, coincidentally, have very high-quality and worthwhile recent posts on films about duelling magicians:

this short film is my starting point, and it reveals to me the challenges that lie ahead. Often we have to look carefully at films to come to terms with their idiosyncrasies, but Švankmajer’s work is particularly daunting in its concentration of allegory and allusion. [...] For eleven minutes [of this film], two magicians do battle, and their tricks require a montage of colliding images and a range of animation techniques: the two actors wear giant masks on their heads, probably papier-mâché, making them look like living, stringless marionettes, and Švankmajer manipulates them accordingly. The black backdrop allows a bunraku performance of sorts, with objects appearing to fly and float unaided through space; frame-by-frame animation moves the eyes of the masks; a shot of pixilation makes their bodies flit around the stage in a lightning fast chase. These are endlessly mutable bodies, but there is none of the joyous spectacle of Méliès’ filmed tricks here - the artifice is always signposted, never seamlessly suggestive, and the stolid expressions on the masked faces convey no fun, only procedure and routine. [links added by FSFF]

In addition to this (like Bordwell's) beautifully illustrated post, Dan's blog Spectacular Attractions has also taken up the challenge of Nicholas Rombes' 10 /40 / 70 film criticism exercise (see FSFF's post on this back on March 5). 10/40/70 is, according to Rombes:

[a]n experiment in writing about film: select three different, arbitrary time codes (in this case the 10 minute, 40 minute, and 70 minute mark), freeze the frames, and use that as the guide to writing about the film. No compromise: the film must be stopped at these time codes. What if, instead of freely choosing what parts of the film to address, one let the film determine this? Constraint as a form of freedom.

In recent posts, North has souped up the engine of the original exercise,

using a random number generator to choose three points from which to take my grabs, and then I have a limited amount of time to write a little about each frame. It’s a quick workout for the critical faculties, and hopefully a way of snapping a jaded blogger out of the comfortable routines of selecting only the most appropriate or illustrative images for a piece of writing

The results are both insightful and highly entertaining, as always with North's blog. Film Studies For Free urges you to check them out, as follows:

One last thought, the following movies may not all be about duelling magicians, but does anyone want to write about The Magician (1926), a horror film directed by Rex Ingram, or The Magician (1958), directed by Ingmar Bergman, or The Illusionist (2006), directed by Neil Burger, and make the highly completist Film Studies For Free one very happy blog indeed? Oh and there's the parody Magicians (2007), directed by Andrew O'Connor too. Any takers?

Posted by Catherine Grant at 15:57

Let's add FSFF too part of the magic. Thanks for sharing wonderful links in the last couple of days. Plenty to learn and discover.

Thanks for the generous review, Catherine, and for the tip-off about the Bordwell article. I'd love to look further into the motif of the duelling magicians, which also drives Susannah Clarke's 'Jonathan Strange and Mr Norrell' and more than one Melies film. Gillian Armstrong made a film recently, Death Defying Acts, about Houdini's affair with a fake medium trying to defraud him (and it's not quite as terrible as some reviews would have you believe). Many of the great 19th-C magicians, like Houdini and John Nevil Maskelyne, were anti-Spiritualists who often had combative challenges as part of their hype, so it makes sense for it to spill over into stories about performers trying to outdo each other. Erik Barnouw's book The Magician and Cinema is the one that got me started on the subject of magic and special effects and, though it's a little dated, it's still worth a look.

Thanks Nitesh. And Dan, thanks a lot for the follow up comments. I followed up on Barnouw and Google gifted me the following link to an informative obituary at Screening the Past: http://www.latrobe.edu.au/screeningthepast/firstrelease/fr1201/pzfr13a.htm
I love the films I've seen about magicians, so will follow up on your suggestions for further viewing and will enjoy reading more about your research. Thanks again.

Thanks for sharing the links. I'd like to add www.wrightonfilm.com to the list of illustrative and thoughtful film blogs. It's run by a PhD student in film studies, and it always provides insightful analysis of film style.

Thanks Oliver. Yes, I agree Bejamin Wright's blog is very good and there's been a link to it in FSFF's blogroll for a while. There's also a link to a nice short essay by him in the post Music to the Eyes on film music/sound. Here it is again:
http://www.offscreen.com/Sound_Issue/wright_forum1.pdfon film