Touching on Touch of Evil: Projecting Latin America at the Movies 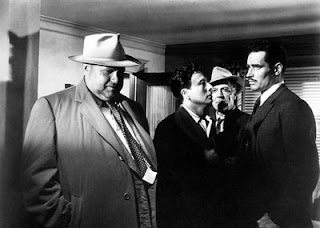 the ways in which Latin America has figured in Hollywood and European cinema. Rather than lamenting the distance between stereotype and reality, it is interested in the functions served by the innumerable projections of fantasized Latin Americas onto the silver screen.

This website - Projections - was founded in 2005 by the renowned Latin-Americanist scholar Jon Beasley-Murray, currently Assistant Professor in the Department of French, Hispanic, and Italian Studies at the University of British Columbia, Canada. As his university website testifies, Beasley-Murray is a longstanding practitioner and exponent of Open Access scholarship with numerous of his excellent publications archived online. He is also author of the important weblog Posthegemony.

Projections' project is to write about Hollywood and European movies 'in which Latin America plays a part, however small'. Beasley-Murray asks: 'Is there some shared element beyond the contingent commonality of location or theme? My wager is that there is, and that it's something worth writing about. Indeed, my suspicion is that when Hollywood goes Latin, it reveals something essential about cinema tout court.' The index by title of the many films so far examined can be found by clicking HERE.

For Spring 2009, this project has been aided by a UBC grant to hire three undergraduate student researchers to expand this online database of Latin America on screen. As Beasley-Murray notes in a blurb on the UBC website of his encouragement of students to write blogs

The idea is in large part to get beyond the ghetto of closed, proprietary educational software (WebCT and the like), to give students a sense that they are producing research on a public stage, and to integrate their learning with their own real world experience of the internet.

Important work, indeed. To conclude its celebration of the achievement of Projections, Film Studies For Free decided to drill down and produce an extensive series of high-quality, online-resource links pertaining to one of the films studied on that blog (and a great favourite of this blogger, too): Orson Welles's 1958 Touch of Evil. The list is headed by Projections's great entry on this film.
Online analyses of and information about Touch of Evil:
Online discussions of and information about the making, remaking, and DVD production of Touch of Evil:
On Orson Welles, with significant discussion of Touch of Evil:
Also see the wonderful Wellesnet, the Orson Welles Web Resource, together with its sister project The Museum of Orson Welles which continues to 'compile and present the available radio and recorded works of Orson Welles'.
Posted by Catherine Grant at 12:41

Thanks so much for the kind words! We're thrilled at such a thoughtful and positive account of what we're up to. More is to come on Projections over the next few months...