Harun Farocki on the web and in London 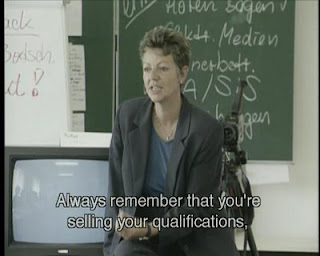 Image above taken from The Interview (Video, Harun Farocki, 1997):

'In the summer of 1996, we filmed application training courses in which one learns how to apply for a Job. School drop-outs, university graduates, people who have been retrained, the long-term unemployed, recovered drug addicts, and mid-level managers - all of them are supposed to learn how to market and sell themselves, a skill to which the term "self management" is applied. The self is perhaps nothing more than a metaphysical hook from which to hang a social identity. It was Kafka who Iikened being accepted for a job to entering the Kingdom of Heaven; the paths leading to both are completely uncertain. Today one speaks of getting a job with the greatest obsequiousness, but without any grand expectations.' (Harun Farocki on The Interview)

Film Studies For Free can testify that there is no better written introduction to the fascinating work of Berlin-based, visual artist and writer Harun Farocki's films and video installation work than a 2002 essay that Thomas Elsaesser (also editor of the 2004 collection Harun Farocki: Working on the Sight Lines - see HERE) wrote for Senses of Cinema. Here are a few insights from the conclusion to this piece in which Elsaesser sets out the reach of Farocki's artwork:

[...] Farocki has also noticed for us how prisons and supermarkets, video-games and theatres of war have become 'work-places' – of subjects as much as of commodities. They are spaces that are converging, once one appreciates how they all fall under the new pragmatics of the time-space logic of optimising access, flow, control. These sites a filmmaker has to take cognisance of and recognise him/herself implicated in, but so has the spectator, whose role has changed so much.

As one walks through Farocki's works, which have become our worlds, one realises that he may be one of the few filmmakers today capable of understanding the logic of this convergence, contesting its inevitability and yet feeling confident enough to continue to believe in the wit, wisdom and the poetry of images. This certainly makes Harun Farocki an important filmmaker: probably Germany's best-known important filmmaker.

Inspired by Farocki's films -- which seem more and more relevant to our daily lives -- as well as by Elsaesser's many perceptive words about them, Film Studies For Free wanted to publicize the ongoing exhibition "Harun Farocki, 3 Early Films" at the Cubitt Gallery, London (17 January – 22 February 2009), as well as the surrounding events to be held at the Goethe-Institut and Cubitt Gallery (31 January-20 February).

For those of you in search of more information about, or analyses of Farocki's work, FSFF decided to produce as extensive a list of live links as it could to some relevant online resources of note:

Thanks for the feedback and especially for the link to the transport blog. Sorry to have missed this from the original posting, but it's such a good one that I'll add it above. Thanks again.

Thanks for this collection of links. Very useful!
May I had a small interview (in Portuguese only, I'm sorry) with Harun Farocki, called "The Petzold-Farocki interference", especially focusing on his work in the fictions of Christian Petzold?

time I've found myself on this site this evening, looking at stuff on Pedro costa and Ulrich Seidl, and now this. Oddly enough Workers leaving the factory was a film that Costa was talking about in the programme for this week's retrospective at the TM.

Another very important piece because it maps Farocki's shift to gallery/museum installation is Elsaesser's "The Future of 'Art' and 'Work'in the Age of Vision Machines. Harun Farocki" in After the Avant-Garde: Contemporary German and Austrian Experimental Film. It is reproduced in full on google books! http://books.google.com/books?id=Y1_8odWgKNgC&pg=PA31&lpg=PA31&dq=Thomas+Elsaesser,+After+the+Avant+Garde+Halle&source=bl&ots=YN3MSFL1Me&sig=pi3946OOSQYqqHgSnfgXVog2-BE&hl=en&ei=AT-uS8_sDYSF4QaSic2_Dw&sa=X&oi=book_result&ct=result&resnum=1&ved=0CAgQ6AEwAA#v=onepage&q=Thomas%20Elsaesser%2C%20After%20the%20Avant%20Garde%20Halle&f=false

The other reference which I think should go on the most important, is the exhibition catalogue that accompanied the show at Raven Row:
Harun Farocki. Against What? Against Whom?, Koenig Books