12 Favourite Online Film Studies Items from 2017, and Other Links of Note!

To commemorate the somewhat sad and strange outgoing year -- and very much to welcome in 2018 --- Film Studies For Free has selected, below, twelve of its favourite online film studies items encountered (or re-encountered) in 2017 for your delectation and delight - in no particular order of category.

Some of these involved poignant encounters, associated with terribly untimely passings of pathbreaking scholars (see no. 1). Some are amazing new resources from (already) the most generous of brilliant scholars (see no. 2). All come with associated links, and are well worth your time exploring.

Wishing you a radically happy and active 2018!

With openly accessible love (and a brand new video, above) from FSFF xx 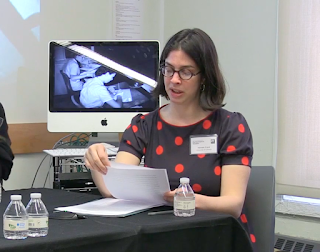 Dr. Frank tragically died on August 28, 2017, at the age of 33. She was one of the most original, accomplished and promising scholars of her generation. She will be hugely missed but much remembered. 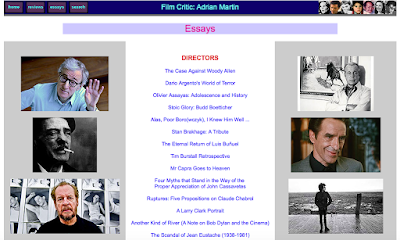 
"Long awaited" doesn't even get close to describing film critic and scholar extraordinaire Adrian Martin's website project to gather much of his published film criticism work and offer it up for free! But it arrived in 2017, starting with over 2000 entries to amazing pieces of writing and thinking, which are being added to every week!

Titled FILM CRITIC: ADRIAN MARTIN, the website also points to a connected 'Patreon' campaign to raise some funds to help keep it maintained and regularly updated. FSFF's author has signed up to do just that.

It's not every day that one of the world's leading writers about film gives away quite so much of his lifetime's work to the public domain. Good on ya, and thank you, Adrian!

Film and Media Studies podcasts continued to delight us in 2017. The following three (listed in alphabetical order) tied for their place as FSFF's favourite. 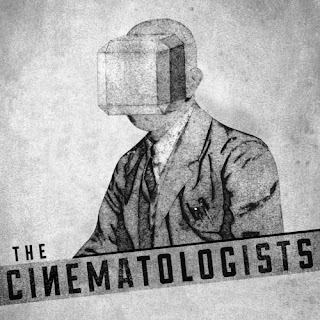 Also, check out new podcast on the block:
Eavesdropping at the Movies by Jose Arroyo and Michael Glass

January 2017 entries:
How LA LA LAND is made
My girl Friday, and his, and yours
Fantasy, flashbacks, and what-ifs: 2016 pays off the past
February 2017 entries:
Anybody but Griffith
Oscar’s Siren song 3: A guest post by Jeff Smith
LA LA LAND: Singin’ in the sun
All my objections to Trump won’t fit on one blog
March 2017 entries:
Going inside by staying outside: L’AVVENTURA on the Criterion Channel
My cover is blown
The Oscars’ Best Picture and other Best Picture
Waldo Lydecker, James Schamus, and 1910s movie storytelling
April 2017 entries:
Film noir, a hundred years ago
Wisconsin Film Festival: Cutting to the chase, and away from it
Wisconsin Fim Festival: An unexpected gem, a Zucchini, and a farewell
May 2017 entries:
Three women of Cannes: A guest entry by Kelley Conway
Ladies at all levels
Wayward ways and roads not taken
Good morning from Ozuland
June 2017 entries:
Ritrovato 2017: Drinking from the firehose
Grand motel
James Agee: Astonishing excellence: A guest post by Charles Maland
FilmStruck and Criterion: Now Roku-ready
Thrill me!
July 2017 entries:
MONSIEUR VERDOUX: Lethal Lothario
Books not so briefly noted
We do film, dammit: Charlie Keil interviews us
Ritrovato 2017: Many faces, many places
Ritrovato 2017: An embarrassment of riches
August 2017 entries:
Venice 2017: Early days
Fassbinder’s figures: Jeff Smith on ALI: FEAR EATS THE SOUL
Is there a blog in this class? 2017
DUNKIRK Part 1: Straight to the good stuff
DUNKIRK Part 2: The art film as event movie
September 2017 entries:
Mmm, M good
Lubitsch redoes Lubitsch
REINVENTING HOLLYWOOD: Out of the past
Venice 2017: Crimes, no misdemeanors
Venice 2017: Martel’s drama of expectations
Venice 2017: College days
Venice 2017: Hunting Golden Lions
Venice 2017: Sensory Saturday; or, what puts the Virtual in VR?
Venice 2017: Lubitsch and Pickford, finally together again
October 2017 entries:
Biomechanics goes to the Big House: BRUTE FORCE on the Criterion Channel
Women, Oscars, and power
REINVENTING HOLLYWOOD comes to Astoria
One last big job: How heist movies tell their stories
REINVENTING HOLLYWOOD: Post-partum downs and ups
THE LOST WORLD refound, piece by piece
November 2017 entries:
Taika Waititi: The very model of a modern movie-maker
Time-shifting: THE PHANTOM CARRIAGE on the Criterion Channel
Something familiar, something peculiar, something for everyone: The 1910s tonight
The Fabulous Forties once more: REINVENTING HOLLYWOOD spreads out on the Net
The Celestial Arthouse: FilmStruck and Criterion Channel with an offer hard to refuse
Bill Morrison’s lyrical tale of loss, destruction, and (sometimes) recovery
Dreyer, and more, in Houghton
December 2017 entries:
The ten best films of … 1927
The Boy’s life: Harold Lloyd’s GIRL SHY on the Criterion Channel
Patchwork imagination: Lee Kwangkuk’s framed and frayed stories 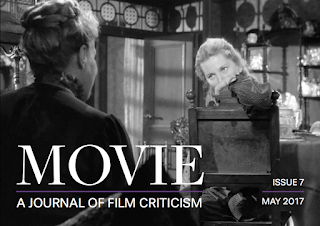 A tie this year between The Cine-Files, which brings some truly wonderful material online, year after year, thanks largely to the amazing talents of Editor-in-Chief Tracy Cox-Stanton, and Movie: A Journal of Film Criticism, similarly run by a passionate team of academics, which introduced a brilliant new audiovisual essay section!

FSFF is very much looking forward to the publication of a new Jump Cut issue in Spring 2018 following on from the very sad loss of one of its pioneering editors, Chuck Kleinhans, to whom this blog dedicated its previous entry in tribute.

Chloé Galibert-Laîné's desktop documentary My crush was a superstar

This was at the the top of my top ten picks in the end of year Sight and Sound poll: "The best video essays of 2017" expertly and painstakingly gathered by Kevin B. Lee and David Verdeure.

Also check out this top 17 list curated by Jacob Oller for the ONE PERFECT SHOT (now FILM SCHOOL REJECTS) website.

A two-way tie between:

Cristina Alvarez López and Adrian Martin for MUBI, Filmkrant, and themselves (see also this great video interview with them by Julia Vassilieva from Monash Film and Screen Studies);

Oswald Iten of FILMBULLETIN and other sites 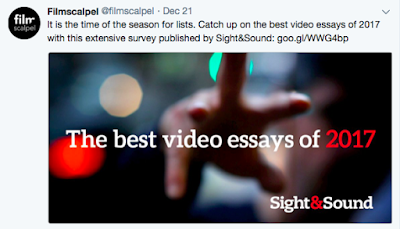 9.
Best online scholarly collaboration between a filmmaker and a film scholar (who is also a filmmaker!)

How Action Movies are Spectacular… and Boring
Science of Editing Series, This Guy Edits/Sven Pape and Dr Karen Pearlman 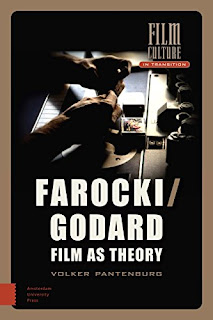 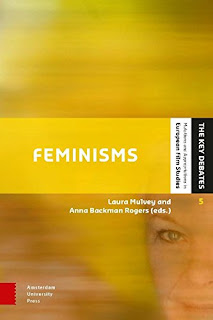 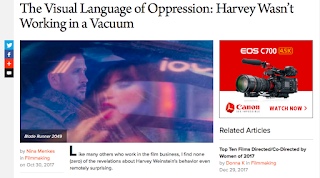 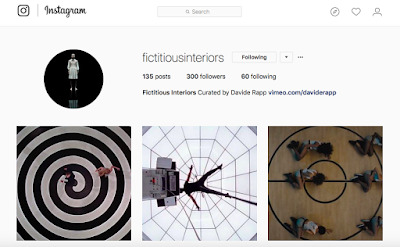 Posted by Catherine Grant at 17:34