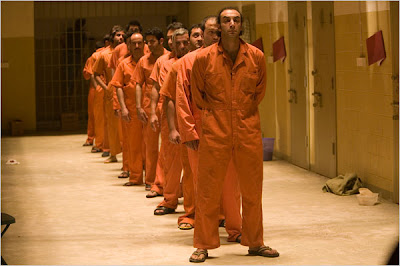 A re-enactment of a scene at Abu Ghraib in
Standard Operating Procedure (Errol Morris, 2008)
Back from its annual holidays, and (rather languidly) catching up with what it has missed, Film Studies For Free couldn't believe its luck to discover that the always excellent film and television studies e-journal Jump Cut had published one of its best (and biggest) issues ever.  Just take a look at the following tasty section headings and then scroll down further for direct links to each and every article.

By the way, if you are a Facebook user and would like to receive FSFF's frequent, short, recommendations of openly accessible film studies resources of note, but don't want to join its merry legion of Twitter followers, then why not visit and like Film Studies For Free's handy Facebook page where lots of great and good film and moving image studies folk hang out?

Torture and horror film
Experimental and art worlds
The last word
Posted by Catherine Grant at 13:23

Too! Many! Links! Welcome back, Catherine. What a haul you've brought us this time!