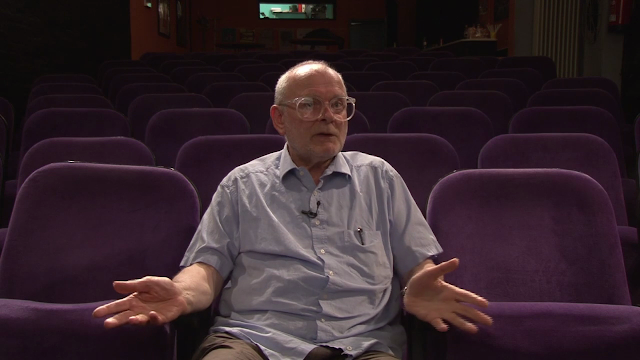 [S]election by the camera [...] asserts significance. The image is displayed not only to relay information but to claim that it matters and to guide us towards the ways in which it matters...

[A] film’s form and method are incomprehensible outside of a recognition that its story takes place, and its images are both made and found, in a world...

Movies always take us into the middle of things because the film and its story begin, but the world does not...

I suggest that a prime task of interpretation is to articulate in the medium of prose some aspects of what artists have made perfectly and precisely clear in the medium of film. The meanings I have discussed in the Caught fragment are neither stated nor in any special sense implied. They are filmed. Whatever else that means (which it is a purpose of criticism and theory to explore) it means that they are not hidden in or behind the movie, and that my interpretation is not an attempt to clarify what the picture has obscured. I have written about things that I believe to be in the film for all to see, and to see the sense of.

It is with very great sadness that Film Studies For Free brings you its latest entry: a commemoration of the life, film criticism, theory and scholarship of Victor Perkins who died a week ago today.

V. F. Perkins was a founding editor of the hugely influential film critical publication MOVIE. He was also the author of Film as Film (Penguin, 1972), one of the most inspiring of the foundational texts in film studies, and of two thrilling monographs on individual films for the BFI Film Classics series: The Magnificent Ambersons (1999); and La Règle du jeu (2012). After beginning to teach on cinema in a number of institutional settings from the 1960s (including at Bulmershe College of Education), he lectured on that subject at Warwick University (in the remarkable department he co-founded) from 1978 and was Honorary Professor in Film Studies.

Although Victor had been ill for several years, his passing was quite sudden and thus shocking to his family, friends and colleagues. He is, without doubt, someone who will be greatly missed by all those blessed by his personal and professional acquaintance (by all accounts, he was a truly wonderful colleague, teacher and research supervisor), as well as by the many, many thousands of people around the world who have loved and learned from his writing on the cinema.

FSFF's author had the very great pleasure of knowing Victor a little, and spent some very enjoyable (and inspiring) times with him over the last two decades. He was an enthusiastic supporter of this website and its ethos from FSFF's earliest days back in 2008, and was a most welcome correspondent on the topic of online film resources. He was a passionate advocate for, and practical supporter of, open-access publishing and multimedia film studies, as his key role in the relaunch as an online journal of MOVIE: A Journal of Film Criticism testifies. Victor always wondered if he'd go on to make video essays, a form in which he had a very keen interest. FSFF had always fervently hoped that he would....

There will undoubtedly be many tributes to his work from those who are much better qualified to write these than FSFF's author. So the aim of what follows is confined mostly to the significant task of updating existing entries at this website on Perkins' online work, and in collecting together links to online interviews with him, and writings about him.

But FSFF also offers up, below, four videos about Victor's work - three of these newly commissioned and produced in memoriam since Victor's death - by Christian Keathley, Hoi Lun Law and Catherine Grant (the fourth is by film scholar Patrick Keating). Update: Alex Clayton's tribute "Spin the Wheel" was added on July 27 and Ian Garwood's "Choice Moments" on July 30.

Furthermore, it warmly invites its readers to produce and submit their own online tribute videos and texts (please send links to these via the comments function below, or by email, and also please send on links to any relevant work or resources not yet listed below. Thank you).

In the meantime, FSFF's author offers her deepest condolences to Victor's family (especially his daughter and son), and to his close friends and colleagues at this very sad time.


for Victor Perkins by Christian Keathley

Absorbing the Unobserved - a tribute to V.F. Perkins by Hoi Lun Law


DÉCORUMS - For V.F. Perkins by Catherine Grant
'A video tribute about delicate moments of (decorous) choice that reworks a much loved paragraph from the truly remarkable writing of film critic and scholar V.F. Perkins (1936-July 15, 2016). Warm thanks go to my friend Andrew Klevan who introduced me to Victor's reading of this sequence from Renoir's La Règle du jeu back in 1998'


Spin the Wheel - For Victor by Alex Clayton


A two-part interview excerpt with V.F. Perkins by Dr Richard Wallace (Department of Film and Television Studies, University of Warwick), Part of a larger interview conducted by Wallace for the 'Voices of the University: Memories of Warwick, 1965-2015' oral history project:

The below embedded videos are the twelve constituent parts of a truly fascinating interview with V.F. Perkins which took place at the Kino 8 1/2 in Saarbrücken, Germany, and was filmed by Media Art and Design Studiengang. In the interview, Perkins engagingly discusses his approach to film studies and, in particular, talks about the trajectory of his foundational 1972 book Film as Film, and about his research on Jean Renoir's1939 film Le Régle du jeu about which he had written a 2012 book for the BFI Film Classics series (excerpt here).

The Rules of the Game

Online writing about V.F. Perkins
Posted by Catherine Grant at 12:10

I am deeply moved by this tribute (by these tributes) to my wonderful Dad.
A kind, generous and brilliant writer, father, teacher, friend and colleague.
I think it is not too brave to say 'a Genius', it was a term he affectionately applied to others and a quality he was ready to see and to affectionately praise, though he didn't claim it for himself.
Dad would be so delighted by this.
Thanks to you all.
Polly Perkins

Dear Polly, thank you so much for leaving this comment. I can only begin to imagine how sad and difficult things must be right now. But I hope that the huge respect, admiration and love that so many people around the world (including me) feel for your father's work, as well for him personally, will indeed be a comfort in the months and years to come. Wishing you and your brother all the very best right now.

This is really very sad news, which I have learnt belatedly. I was thinking of writing him an e-mail about a small French book on Ophuls I had just bought at Bologna... I never met Victor, but we had e-mailed each other for years and sent each other dvds since ...it seems ages ago, it was the time were both of us, each in our separate countries, took part in the demonstrations against the Irak war. I had the pleasure to read the complete versions of his writings on Ophuls or "La Règle du jeu" (I was astonished that someone of his age and prestige could be "shortened" by anyone), which I hope someone will collect and print. I must say he was always my favourite film writer (together with Robin Wood and Jean Douchet among those who did not become filmmakers), and I still regard "Film As Film" as the most simple, brief, brilliant and lasting text on the cinema, which I've been advising everybody to read for amost half a century, and the best introduction possible for watching films and trying to write about them.
Miguel Marías

Thanks so much for your lovely tribute, Miguel. Much appreciated. Catherine

I am still friends with many of my Warwick Film Studies friends 1994-1997. Victor was chair of the Department the first year, and a huge part of all our experience. I am so very sad to hear of his passing. I wanted to share this memory of how he changed my life. I got refused a place at Warwick because my predicted grades weren't good enough. But when I got 3 A's, my Mum insisted I phone up the department and Victor agreed to see me. I was a comprehensive school kid from Coventry, no one in my family had been to University. He grilled me about film and asked me to 'read' the poster image on the back of his door.... at the end said 'I am sorry but I am not going to offer you a place, what will you do now?' and I said 'I'm going to come back every year until you do, I am not giving up' and left, fighting back tears. When I got home, he phoned and offered me a place, and was always a very supportive teacher throughout my years on the course, so generous with his time and ideas. I am not sure why he changed his mind, but I owe him a lot. I now teach Film and Media Studies and still use his book! Kerrie Campbell (was Lofthouse)

Thank you so much for adding your lovely story to this tribute, Kerrie. Victor was a demanding but very kind teacher by all accounts a very generous man.

When my mum died and I called him to give the funeral details he, at first, said he couldn't attend because it was on a 'Tutorials day' and his students needed him. I was so hurt and angry but, like him, I was conflict averse, so I didn't let on and put the phone down, then wept myself empty.
Just as I had decided to call him back and demand a re-assessment of 'needs' he instead called me and apologised for his 'stupidity' and let me know that he would, of course, 'without question be there'.
It was vital to me that he was, I think I might not have survived the event without him. I'm not sure I could have forgiven it if he hadn't been there. He was a wonderful father to me, especially once Mum died and he realised, then embraced the gravity of this new level of responsibility. I think he really shone as a parent after that, for me, anyway.
I think this is the same process, Kerrie. He probably saw, very soon after making it, his mistake and unashamedly- or perhaps with the assistance of shame- went about correcting it. It sounds like a move which paid off for you, for him and for many others.