A Guide to Studying a Movie Magazine by Tamar Jeffers McDonald with Catherine Grant (on shaky cam!).
With her customary wit and aplomb, Jeffers McDonald shows us how media historians and theorists might make use of a copy of the November 1965 issue of the American fan magazine Modern Screen. See below for further information about the video, as well as for a discussion about how Jeffers McDonald used resources, like the one showcased in the video, in research for her new book Doris Day Confidential: Hollywood Sex and Stardom.

Pages from Radio and Television Mirror, Jan-June 1949 (archived by the Internet Archive), as discussed by Tamar Jeffers McDonald, Reader in Film Studies at the University of Kent, UK, in her report, below, on using Lantern, Media History Digital Library's search and visualisation platform.


Many readers at Film Studies For Free will already know of, and indeed be using, Lantern, the new, essential, search and visualization platform for the Media History Digital Library, a wonderful project that FSFF wrote about back in 2011 when it launched. The MHDL has digitized over 800,000 pages of out-of-copyright media publications for open access. Many of the rare magazines in the collection came from the Library of Congress Packard Campus (you can see the full list of contributing individuals and sponsors on the credits webpage). The MHDL's searchable collections now include:

The great news is that we can search and access items from the collection platform at MHDL's brilliant Lantern site http://lantern.mediahist.org, or simply type your query into the searchbox of the existing MHDL site: http://mediahistoryproject.org. The site was developed designed and produced by Eric Hoyt, Assistant Professor of Communication Arts, UW-Madison and Co-Director (with David Pierce), Media History Digital Library.

FSFF asked film scholar Tamar Jeffers McDonald, whose fabulous work in this area is expanded on in the next section of this entry, to test Lantern as a highly seasoned user of offline archives. Here is her glowing account:

For me Lantern's utility lies not only in its stock of periodicals, freely accessible, fully searchable, available for my own research purposes but also the possibilities it offers as a teaching tool, bringing film history alive.
My recent research has been on Doris Day. Trips to the British Library, the Library of Congress and the Margaret Herrick Library in Los Angeles netted me over 1500 articles to peruse, but not the first article turned up by Lantern when I put in "Doris Day" as the search term, "That Day Girl/That Hope Fellow" from Radio and Television Mirror, May 1949. This is an early piece in which the new star herself purports to write about Bob Hope, the veteran entertainer on whose radio show Day appeared as songstress and sidekick. The article attempts to preserve the double-act nature of the pair's relationship by getting each to write about the other. The columns notionally penned by 'Day' - and there is no way at this distance that we can either prove or disprove her actual authorship - testify to what a great guy Hope is; his sections do the same, maintaining his comic persona as a narcissist. This confirms the piece's early date - 1949 - Day was already beginning to be spoken of as a major star and fan magazines would not allow space dedicated to her to boost another performer for much longer. By 1952 coverage of Day was saturating the movie magazines: she appeared on or in all twelve monthly issues of Movie Stars Parade and was featured in seventy-five other periodicals that year too. Finding this piece through Lantern is a valuable corrective, then, to the belief that Day became a star effortlessly, consistently receiving lead billing and attention in the magazines. While Motion Picture did hail her as the next big thing in August 1948 [see images below**], other publications obviously took longer to be convinced.
In addition to its value for researching for individual stars or films, Lantern is also useful for more general searches for social history. Since the whole text of the issues is scanned and searchable, the advertising sections of the magazines can be viewed also, and provide fascinating social history data about the presentation of a variety of products. Typing in "pink toothbrush" recovers the history of Ipana, a toothpaste which boasted it could do away with gum disease; "Zonite" claimed it was the "solution to a woman's most intimate problem". Enter any product name to see the variety of methods used to sell it in the different periodicals, and different periods, covered: a search for "Lustre Creme shampoo" will bring up gorgeous full colour portraits of Hollywood stars as well as more utilitarian black and white ads featuring a more anonymous 'the Lustre-Creme Girl'.
Lantern truly illuminates both the importance of fan and trade periodicals as cinema paratexts, and itself as an invaluable source for finding and searching them.
(Note: For the first search, I simply put in Doris Day as the term, without inverted commas, with no specified date range and without altering the default Sort mode for results, By Relevance. Changing this to 'Sort by date' is the best option to capture the changing methods of presentation for product advertising).

Further great accounts of Lantern may be found at the links below:

2. A Guide to Studying a Movie Magazine

In the video embedded at the top of the entry, Tamar Jeffers McDonald presents a guide to studying a movie magazine. With her customary wit and aplomb, she shows us how media historians and theorists might make use of a copy of the November 1965 issue of the American fan magazine Modern Screen. The above, somewhat impromptu (shaky cam!) resource came out of an interview with Jeffers McDonald carried out at the National Theatre, London, in October 2013 by Film Studies For Free. An audio recording of the interview is embedded below and online here at FSFF's new podcast site.

The  main topic of conversation was about Jeffers McDonald's new book Doris Day Confidential: Hollywood Sex and Stardom (London: I B Tauris, 2013). This book poses as a central question, amongst others, “Why do we assume Doris Day always plays a virgin?” In previous work (her PhD thesis, the edited collection Virgin Territory: Representing Sexual Inexperience in Film, (Wayne State University Press, 2010), and an article on Rock Hudson from 2007 - see details here) Jeffers McDonald has examined what ‘playing a virgin’ might mean and consist of; now she turns her attention to how this dominant idea has been circulated, through studying the film fan periodicals which advanced and then froze Day’s stardom, a methodology she explores in detail in this video, and in the (12 minutes long) audio interview embedded below. [** See the foot of FSFF's entry for images from Motion Picture Magazine, August 1948, to which Jeffers McDonald refers in the interview].


**Below are images from Motion Picture Magazine, August 1948, reproduced by kind permission of Tamar Jeffers McDonald, to which she refers in her audio interview embedded above. 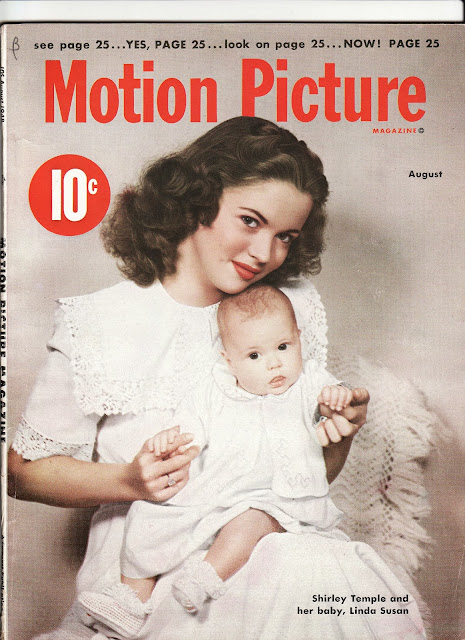 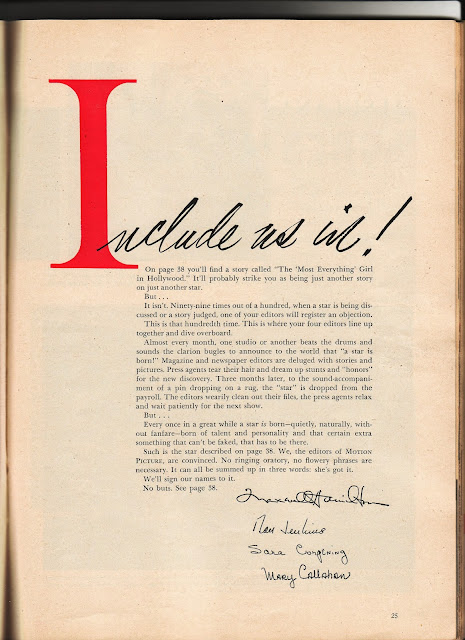 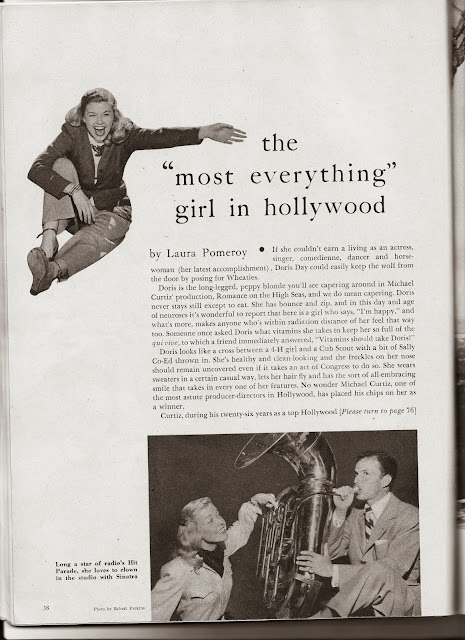 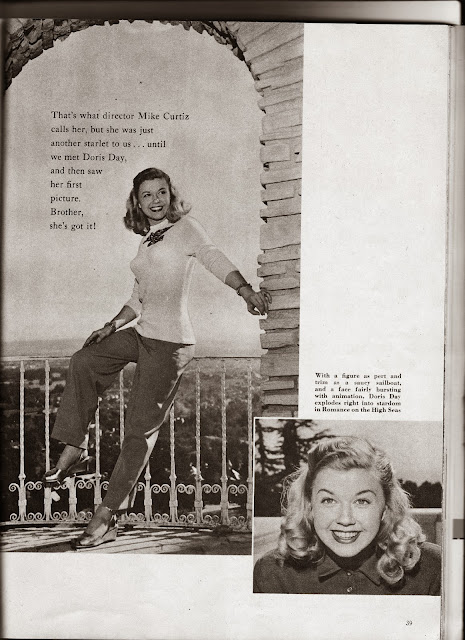 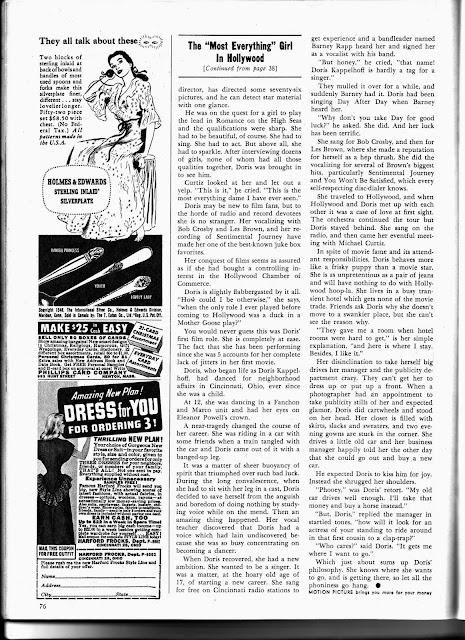 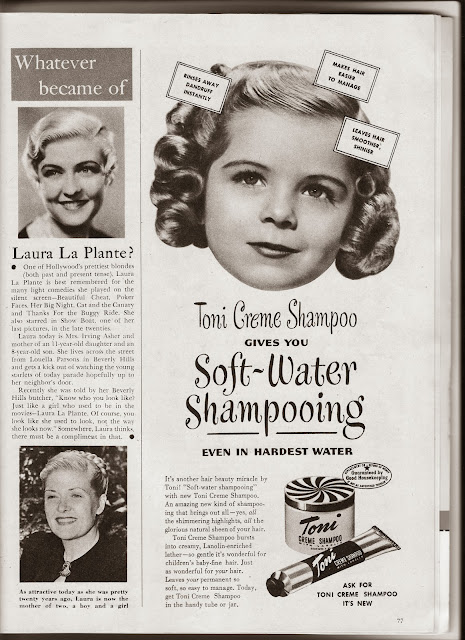 Posted by Catherine Grant at 13:08