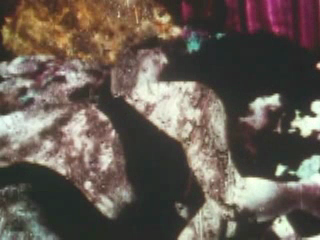 Screencap from Peggy Ahwesh's The Color of Love (1994)

"Peggy Ahwesh is a cinematic alchemist with a penchant for transforming the banal into the sublime. A rare combination of technophile and mystic, Ahwesh has been making experimental and avant-garde films and videos since the seventies, when she first started shooting Super 8 films in Pittsburgh while programming for Pittsburgh Filmmakers and working on George Romero's films. In her own early films, she assembled "a kind of sketchbook of people's behaviors in relation to the camera," as she describes it; "people always 'sort of performing. But somehow some Sisyphean act of performance." Jeremy Lehrer, The Independent, March 1999

"In Peggy Ahwesh's The Color of Love (1994, 16mm), the “cinephiliac moment” finds its object in the detritus of cinema’s history: the ruin is doubled over, in the appropriation of an extant pornographic reel, an 8mm film which appears to be from the late 1960s. The film strip is in a state of florid decay. The ten-minute film has been re-edited and optically printed to preserve the evidence of deterioration, which appears as a fluid, leaking emulsion on the surface of the image, obstructing vision, forming ornate patterns and resembling an organic presence unto itself."  Elena Gorfinkel, World Picture 4.1, 2010


"The Color of Love resurrects a piece of garish silent found footage from a hardcore porn film discovered in a state of advanced chromatic decay: through the lurid poetics of film decomposition, the tawdry is transformed into sublime. It's a triumph of exquisite disfigurement, of the beneficial defect. Found footage films are sometimes called cameraless filmmaking because they're creations of pure editing. The Color of Love is not entirely cameraless, however. Although Ahwesh presents the optical/color deterioration exactly as found, she optically reframed, step-printed, and reedited certain passages for emphasis. The reediting lends the film's rhythm an intermittently abrupt, slightly disintegrating lilt that suggests the jumpy, disjunctive quality of print wear-and-tear." Gavin Smith, Film Comment, July/August 1995

Along with a whole host of top-notch and, as always with WP, beautifully written, articles on many aspects of cinematic arousal and desire, this stimulating issue valuably incorporates work from three legendary American experimental filmmakers.

First up are two brilliant works from artist Peggy Ahwesh, including her truly astonishing 1994 found-footage film The Color of Love, together with a superb essay on that work by Elena Gorfinkel (for an excellent overview of Ahwesh's work, see John David Rhodes's Senses of Cinema article; and for a short, but very powerful, view of The Color of Love read Steven Shaviro's essay 'Stranded in the Jungle--17).

Then there are also four unpublished poems by the legendary film artist Maya Deren produced between 1927 and 1942, retrieved from the Maya Deren Collection, Howard Gotlieb Archival Research Center at Boston University and which, According to John David Rhodes, the poems' 'emphasis on vision and paratactic imagery seems to anticipate her turn to filmmaking'. (Here's a 2007 essay by art historian Marina Warner on Deren's work: 'Dancing the White Darkness')

Below, FSFF has pasted in direct links to all the items in WP 4.1. And below that are listed links to further notable, and most definitely scholarly, items on cinema's physiological experiments with the somatic and the sexual, and with audiovisual eroticism and pornography more generally, thrown up in a high-and-low-and-down-and-dirty search of those oh-so-murky Interwebs...


Related openly accessible articles and theses on bodily sensations, affect and desire in the cinema:
Posted by Catherine Grant at 16:25